Great finale to the Winter Season

Only 7 points separated the top 4 in this year's Winter Pairs, after Saturday's final Winter series round. Wayne Ivinson / John Welch, Richard Greaves / Gary Aldred, John Whittaker / Paul Clegg and Nick Avino / Martin Holden contested the Sunday final.
The cream rising to the top were John Whittaker and Paul Clegg shooting 38 on Sunday, complementing the 41 they scored on Saturday.
Second was Richard Greaves and Gary Aldred just three shots behind, topping off a great Winter Series for Gary, who also took top honours in the Winter Order of Merit, a full 30 points ahead of second place Michael Kelbie, with John Berry third.
Taking third place in the Pairs was long time leaders Wayne Ivinson and John Welch, with Captain Nick Avino and Martin Holden taking fourth.
With the Summer season due to start this weekend, this year's summer handicaps will be published on the notice board before this weekend's Texas Scramble. Also a new competition has been added to the honours list sponsored by Captain Nick Avino, the ''King of Birdies'' will be awarded to the player who scores, wait for it, the most birdies in the season. Table will be published in the newsletter. 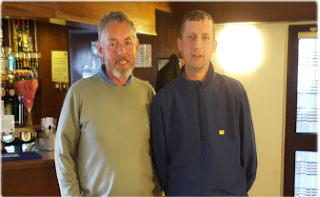